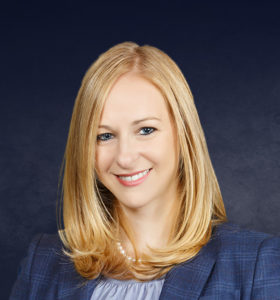 Dawn M. Pinnisi is a Managing Partner of the Firm.  She was born and raised in Brooklyn and attended Brooklyn Law School.  Ms. Pinnisi predominantly handles injury claims in New York and New Jersey on behalf of victims of products liability, professional malpractice, and negligence.  She has twenty years of litigation experience advocating for injured clients and has recovered millions of dollars in jury verdicts, settlements, arbitrations, and mediations on behalf of injury victims.

Ms. Pinnisi prides herself on keeping the focus on her clients. She believes that part of being a good attorney is taking the time to listen to her clients.  Ms. Pinnisi understands that an injury can affect many different aspects of a client’s life and at times, can be truly devastating.

Ms. Pinnisi welcomes the opportunity to effectuate change to help prevent similar injuries in the future.  In one significant product liability case, a ten-month-old girl’s finger was amputated due to a defective hinge on a stroller.

Ms. Pinnisi alerted the United States Consumer Product Safety Commission of the claim and a recall of the dangerous stroller was promptly issued, unquestionably preventing similar injuries to other small children.  In other litigations on behalf of New York City police officers who were injured in the line of duty as well as railroad workers who were forced to work in unsafe and dangerous conditions, Ms. Pinnisi’s efforts contributed to significant policy changes and safety protocols intended to protect workers going forward.

Ms. Pinnisi is honored to advocate on behalf of children as well.  Whether a child is the victim of a birth injury or is being bullied at school, Ms. Pinnisi fights diligently to protect children’s rights.  She recognizes that injuries to children can have long-lasting effects and works hard to put mechanisms in place to ease their burden as they grow.

Ms. Pinnisi is a long-standing member of various Bar Associations including the New York State Trial Lawyers Association.  She is a member of the Million Dollar Advocates Forum and she was honored with a very exclusive designation by the National Trial Lawyers as one of the “Top 100 Trial lawyers”.