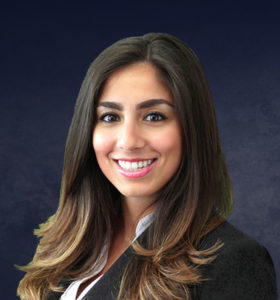 Sophia Soraya is a Senior Associate with the Firm. Her practice focuses on personal injury and medical malpractice claims in both New York and New Jersey.

Prior to joining the Firm, Ms. Soraya commenced her legal career at a boutique law firm, where she handled a variety of matters, including, but not limited to, personal injury, criminal defense and appellate practice. Notably, Ms. Soraya settled a personal injury matter for approximately $1.5 million, wherein a man working outside a high-rise building was critically injured after an air conditioner fell 15 stories and landed on him. She also represented a teenage boy charged with two counts of first-degree aggravated sexual assault of a minor (amongst other charges), which resulted in a guilty plea to an offense not sexual in nature, removing the requirement to register as a sex offender under Megan’s Law.

A graduate from New England Law | Boston, Ms. Soraya served as Student Attorney for the In-House Law Clinic and was actively involved with the Student Bar Association. She also served as a Mentor in the Mentorship Program for incoming first-year law students. During her summers, Ms. Soraya interned for the Hon. Donald R. Venezia, J.S.C (ret.) in the Bergen County Superior Court and served as a research and teaching assistant for Associate Dean Judith G. Greenberg.

Ms. Soraya was born and raised in Bergen County, New Jersey, where she currently resides with her husband and children. She is fluent in Farsi.

“I have known Jeff Varcadipane for over 7 years, during which time he has advised me on several real estate and civil claims issues. Most recently, he assisted with my complicated real estate transaction in NYC. He was very responsive...”